These speakers inspire as they lead us beyond innovation to pursue creativity, discovery, and engagement. 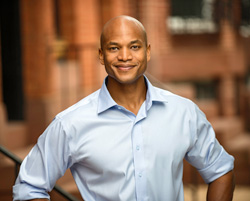 A Phi Theta Kappa graduate of Valley Forge Military College (Pennsylvania), Moore earned his bachelor’s degree with honors from Johns Hopkins University in 1998. He completed an MLitt from Oxford University as a Rhodes Scholar in 2004. Upon graduation, Moore served as a paratrooper and Captain in the United States Army, serving in Afghanistan with the 82nd Airborne Division.

Versatile and innovative, Moore is also the host of “Beyond Belief” on the Oprah Winfrey Network and executive producer and host of “Coming Back with Wes Moore,” which follows veterans as they reintegrate back into society. He is also the executive producer for the PBS documentary “All the Difference,” which follows two African-American teens from the South Side of Chicago on their journey to achieve their dream of graduating from college.