Join New York State Association of Independent Schools (NYSAIS) and IBSC members to explore, connect, and learn best practices for teaching boys. Educators working with boys at all educational levels will benefit from this collaborative conference.

In addition to hearing from inspirational speakers Darius Nabors and Schuyler Bailar, take time for a hands-on workshop led by colleagues aiming to elucidate how boys learn best.

Founder of 59in59 Darius Nabors studied political philosophy at the University of Virginia. (Go Hoos!) At one point he was well versed in the works of Plato and Aristotle. Most recently he worked as a fundraiser for his alma mater. You can usually find him wearing wolf shirts, playing soccer or running ultramarathons in the Blue Ridge Mountains of Virginia. For a new challenge he has taken up photorunning or runography, which combines running and taking pictures. He has yet to master the speed at which to run and take pictures that aren't blurry — he has yet to consider stopping.

59in59 has been in Darius's brain since 2010 when he applied for a Young Explorers Grant with National Geographic. After making excuses for five years, he gave a TEDx Talk about bucket lists and decided it was time to live up to his talk. He quit his job to focus solely on making it happen. When Darius isn't exploring National Parks, he spends time playing Dominion, Settlers of Catan, Harry Potter Clue, and all available board games with his friends and five siblings. 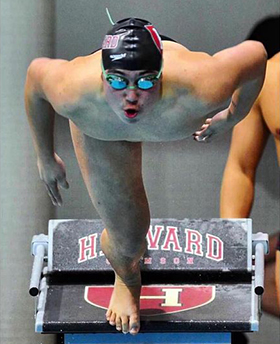 Schuyler Bailar graduated from Georgetown Day School (United States) in 2014 as a top student and an award-winning swimmer. Recruited by most of the Ivy League, he eventually committed to swim for Harvard University, where he became the first openly transgender man to compete in any sport on an NCAA Division 1 men's team.

An elite athlete, he was one of the nation’s top 20 15-year-old breaststrokers. By 17, he and his relay team set a national age group record. Now he swims for Harvard.

Schuyler’s difficult choice — to transition while potentially sacrificing the opportunity to compete at the top level of the NCAA — proved historic and timely. National media have featured his inspirational story, including The Washington Post, 60 Minutes, and The Ellen Show. Displaying his indomitable courage, Schuyler shared his personal story at the 2017 NAIS Annual Conference and the 2017 NYSAIS Athletic Directors Conference.