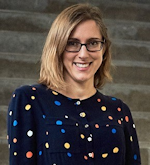 Blakemore studied experimental psychology at Oxford University, followed by her Ph.D. at the UCL Functional Imaging Lab with Chris Frith and Daniel Wolpert investigating the self-monitoring in schizophrenia. She then took up a Wellcome Trust International Research Fellowship to work in Lyon, France, on the perception of causality. She followed this with a Royal Society Dorothy Hodgkin Fellowship and a Royal Society University Research Fellowship at the UCL Institute of Cognitive Neuroscience. Blakemore has garnered awards including the British Psychological Society (BPS) Doctoral Award 2001, BPS Spearman Medal for outstanding early career research 2006, Annual Lecturer Award 2011 by the Swedish Neuropsychology Society, Young Mind & Brain Prize 2013, Royal Society Rosalind Franklin Award 2013, Klaus J. Jacobs Prize 2015, and BPS Presidents’ Award 2018. She is a fellow of the British Academy.

Blakemore is actively involved in public engagement with science activities and has an interest in the links between neuroscience and education. She co-authored a book with Professor Uta Frith called The Learning Brain: Lessons for Education. She sat on the Royal Society BrainWaves working group for neuroscience, education, and lifelong learning and the Royal Society Vision Committee for Science and Mathematics Education. She was interviewed on the BBC Radio 4 programme The Life Scientific. She worked with the Islington Community Theatre on its amazing play, Brainstorm, written and performed by teenagers, which was shown at the National Theatre in London.

Neil Enright MA (Oxon), MBA, NPQH, FRSA is the headmaster of Queen Elizabeth’s School in Barnet, which has consistently been named in the national press in recent years as the country’s top state school for A-level results and the top boys’ state school for GCSE results. He was appointed the 40th headmaster of this selective boys’ school in September 2011.

After reading geography at St. John’s College, Oxford, and a PGCE at London’s Institute of Education, Enright started teaching in 2000 in a mixed comprehensive in the London Borough of Brent. He moved to Queen Elizabeth’s in 2002. Before his appointment as headmaster, he served as head of geography, head of year, assistant head, and deputy head. He was awarded his National Professional Qualification for Headship in 2007 and an MBA in 2010.

Enright is chairman of governors at Northgate School, a Pupil Referral Unit in North West London for young people with severe mental health conditions. His other current voluntary roles include being a governor of Longfield Primary School in Harrow, St. Albans’ High School for Girls, and his alma mater, The John Lyon School, Harrow. Enright’s previous voluntary positions have included serving as an interview panel member for undergraduate geography applicants to St. Hilda’s College and St. Edmund Hall, Oxford, and undertaking various roles for the University of Hertfordshire’s Faculty of Education. He was also involved in development of the Post-Graduate Certificate of Education course in secondary-school geography at the UCL Institute of Education and for several years delivered training for this course to trainees and subject mentors.

The author a several books on education, David Didau is a prominent — and often provocative — blogger and commentator on social media. He has worked as both a teacher and teacher educator. Didau now leads training and consults in both the state and independent sectors, in the UK and around the world. Currently he is leading the design and implementation of a new curriculum for a multi-academy trust. His latest book is Making Kids Clever: A manifesto for closing the advantage gap.

Katharine Birbalsingh is headmistress at Michaela Community School in Wembley, London. Known for its tough-love behavior systems, knowledge teaching, and method of teaching kindness and gratitude, Michaela was graded “outstanding” in every category OFSTED in 2017. Birbalsingh read philosophy and modern languages at University of Oxford and has always taught in inner London. She has made numerous appearances on television and radio and has written for several UK publications. Author of two books, Birbalsingh also edited Battle Hymn of the Tiger Teachers, The Michaela Way. Whether you agree with her or not, Birbalsingh will make you think.

Former politician and current writer and historian, David Faber is headmaster of Summer Fields, a well-known boys’ preparatory school in Oxford. An old boy of the school and former parent, he previously served as a governor for nine years.

After Summer Fields, Faber went on to Eton College and Balliol College, University of Oxford, where he read modern languages. After university he worked for the Conservative Party in several roles before winning election to Parliament in 1992, holding the West Wiltshire constituency for nine years.

He held numerous posts during his parliamentary career, including shadow minister for foreign affairs and secretary of the Conservative Education Committee. He served as parliamentary private secretary to two ministers and sat on several select committees.

Faber stood down from Parliament at the 2001 election to pursue a career as a writer. Published by Simon & Schuster, his first book, Speaking for England, is a triptych biography of the Amery family: Leo Amery, a prominent imperialist politician between the wars, and his two sons, John, who was hanged for treason, and Julian, who enjoyed a long career as a politician. He then published Munich, the 1938 Appeasement Crisis and continues to be an occasional lecturer and media contributor on appeasement.

Faber is a long-serving member of the main committee of the Marylebone Cricket Club, currently chairing its Arts and Library Committee, and has been a trustee of multiple addiction-related charities. He is a governor of Harrow School and Aysgarth School, a boys’ prep school in north Yorkshire; he has served on the executive committee of the Boarding Schools’ Association.

Cricket remains one of his principal hobbies, along with golf (he is a member of the Royal & Ancient), real tennis and Chelsea Football Club.