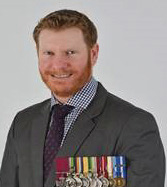 Daniel was born in Nambour, Queensland and grew up in Lowmead , a small town approximately 80 kilometres from Bundaberg, and began his career in the Australian Army at the age of 17 and served for 14 years. During his career, he served with Delta Company, the 6th Battalion, Royal Australian Regiment (6RAR) – a Company that is engraved in Australian military history. He has been deployed in Afghanistan, Iraq and East Timor.

In 2010 Daniel was deployed on his second tour of Afghanistan. Whilst on the outskirts of the village of Derapet, his patrol came under heavy fi by a numerically superior insurgent force. After receiving a friendly casualty, Daniel acted on his own initiative and took decisive action to turn the tide of battle.

This decision would see him risk his life and purposefully draw enemy fire to himself and away from the rest of the members of his patrol who were treating the casualty. This firefight and his actions would continue for over three hours.

In 2012 Daniel was awarded Australia’s 99th Victoria Cross, making him one of only nine living Victoria Cross recipients in the world – this is the fi and only Victoria Cross awarded to a soldier serving the Royal Australian Regiment in its 66 year history. His citation read: ‘For the most conspicuous acts of gallantry and extreme devotion to duty in action in circumstances of great peril’.

In 2011 Daniel discharged from full-time Army service and commenced a career in the mining industry and continues to serve in the Army Reserves. He is also an Ambassador for the Australian Defence Force Assistance Trust. He is a leader who knows what is required to motivate members of his team. Daniel talks about service, leadership, teamwork and making decisions under pressure.

Peter is one of Australia’s leading investment bankers and an active philanthropist. He is the Chairman and one of the original founders of Greenhill Australia.

In the not-for-profit sector he is the Chairman of Grameen Foundation Australia and So They Can - which focus on poverty alleviation in Asia and East Africa respectively, and he works with Indigenous Australians in the Northern Territory. He is a Trustee of the Anindilyakwa Indigenous Mining Trust and a co-founder of Manly Women’s Shelter and founder of Women’s Community Shelters (both focussed on helping homeless women).

Peter was awarded his AM in 2010 for services to the philanthropic sector.

David is one of Queensland’s leading specialists in neuro-oncology. He sees brain cancer affect ordinary people on a daily basis and this has fuelled his crusade to find a cure. He holds a PhD in the Molecular Genetics of Astrocytomas (brain tumours).

He has held numerous teaching and clinical positions in domestic and foreign universities and hospitals, the Queensland Institute of Medical Research, the University of Bochum (Germany) Brigham and Women’s Hospital (Boston) and Harvard University (Boston). David is a currently also a Professor in the medical faculty at Queensland, Griffith and Bond Universities. As Managing Director of the Newro Foundation he spearheads fundraising campaigns and leads clinical trials with his team of research nurses. He is also a volunteer with the Ecumenical Coffee Brigade.

Greg is a Special Counsel at global corporate law firm Norton Rose Fulbright; a former President of the Queensland Law Society and an Adjunct Professor in Law at the University of Queensland (UQ). From 1999- 2007 he was the Honorary Consul for Indonesia in Queensland and for 20 years he has been an active member of the Australian Indonesian Business Council.

Greg has been a voluntary member of the Australian Red Cross for over 40 years, including service as the National President (2003-11) and is currently Chairman of the Standing Committee of the Red Cross and the Red Crescent Societies, an international body. He was awarded an AM in 2001 for service to law and legal education and in 2013 he was awarded an AO for his contribution to governance and leadership of humanitarian aid organisations.