Acting Out, Shaking It All About: Getting Physical Movement into the Languages Classroom to Get the Language out of Boys — Henning Holzheuer, Christ Church Grammar School, Australia

Acting Out, Shaking It All About: Getting Physical Movement into the Languages Classroom to Get the Language out of Boys — Henning Holzheuer, Christ Church Grammar School, Australia 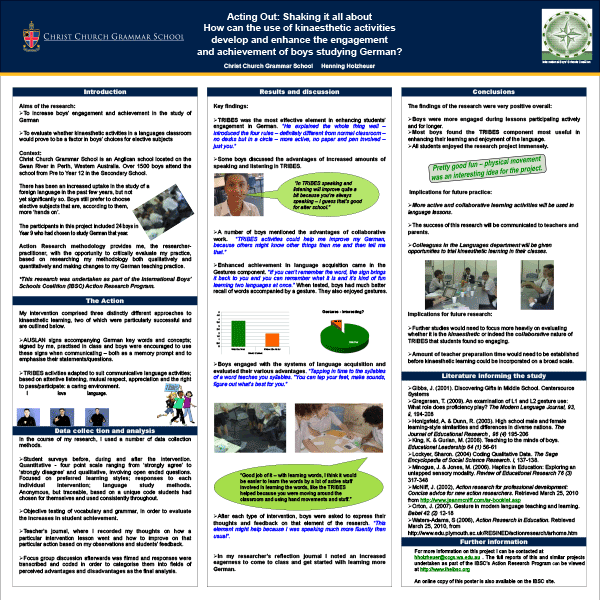 In the latter part of 2010, an action research project was undertaken at a boys’ school in Western Australia involving two Year 9 German classes with a total sample size of twenty five students. The research question under investigation was how the use of kinaesthetic activities would develop and enhance the engagement and achievement of boys in the study of German. Kinaesthetic activities were used specifically because boys at this school tend to choose elective subjects that are by their very nature more tactile, to the detriment of enrolments in foreign language classes. Over the course of four weeks (twelve lessons), three different kinaesthetic teaching aids were introduced: AUSLAN (Australian Sign Language) signs, TRIBES activities and Verbo-Tonal techniques. The boys were excited by the prospect of being involved in a research project and found many of the components interesting and engaging. They enjoyed in particular the opportunity to work actively and collaboratively in the TRIBES component, stating that while gestures and Verbo-Tonal techniques were interesting, they brought little benefit to them personally. It is significant to note that given the opportunity to become more physically active in the classroom and work socially, engagement in lessons increased. In some pre- and post-testing on vocabulary learning, the gestures component also increased their achievement. These two combined are surely a harbinger of students choosing to continue with their language studies into the post-compulsory senior years.