Have No Fear! Role-plays Are Here! To What Extent Do Role-plays Enhance and Develop Boys' Engagement and Achievement in Spanish? — Stewart Steffey, Belmont Hill School, United States

Have No Fear! Role-plays Are Here! To What Extent Do Role-plays Enhance and Develop Boys' Engagement and Achievement in Spanish? — Stewart Steffey, Belmont Hill School, United States 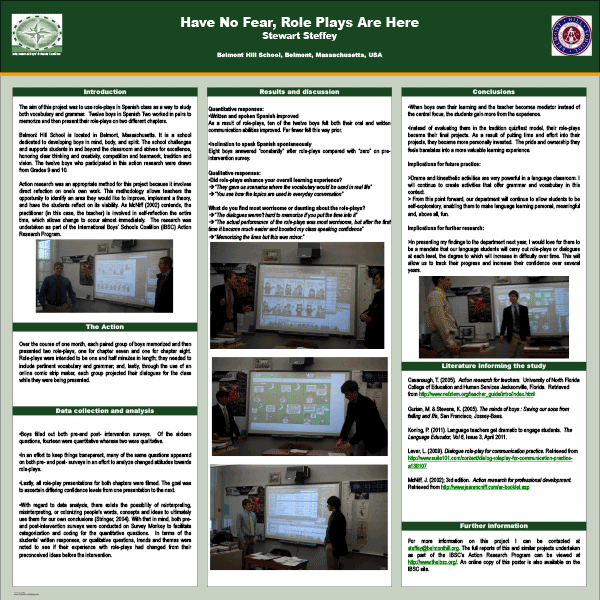 The test group, twelve boys enrolled in Level Two Spanish, ranged in ability and age, allowing the project to reach a diversified demographic. The purpose of the intervention was to offer the students a different and more engaging way to study and practice grammar and vocabulary – a necessary but often tedious task for language learners.  Through creating, rehearsing and presenting role-plays, students were able to actively participate in language learning, bringing new purpose and meaning to their studies. The project surfaced as a result of general frustration with the way boys learn grammar and vocabulary in the traditional textbook context.  The research attempted to improve upon the traditional passive approach to learning these skills, and to make learning more active.  As anticipated, the research took several turns throughout, but ultimately attested to the original assertion: when moving around, acting, and speaking a foreign language, boys are undoubtedly more engaged and curious about what they are learning, and, as a result, achieve at higher levels.  It was satisfying to watch the test group engage in the role-plays and enjoy each other’s presentations.  As a result of the research, role-plays and dialogues directed at specific material will become a more regular part of the modern language curriculum at Belmont Hill School.