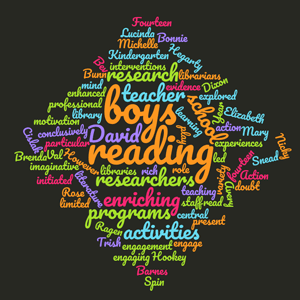 An action research project was undertaken to determine the value of creating and viewing book trailers as a tool to support and enhance boys‟ success and enthusiasm as readers. The objective was to investigate any changes in boys‟ enjoyment of reading before and after the study and to make suggestions for changes to existing practices. Using as our sample group a class of Grade 6 boys at St John‟s Preparatory School in South Africa, we began by surveying their views on reading for pleasure. Each boy then chose a fiction book to read from a selection and afterwards joined others who had read the same book. In turn, each group went on to create a trailer depicting their book. During this process, aspects of the book and story were examined in various ways to support the making of the book trailer. Discussions were held with the boys on how these aspects could be represented in a book trailer to convey the essence of the story without giving away too much. Finally, a refresher course in the application of the software was given and the boys set about making their book trailers. Once finished, they showed them to their peers and to the boys in the year below them. A brief post-trailer survey, to capture their immediate thoughts about the process, was undertaken and this was followed by a more reflective, in-depth questionnaire allowing the boys authentic voices to comment on the action. The results indicate that many participants believed that the action had enhanced their success and enthusiasm as readers, while a small number felt it had not changed the way they viewed reading.