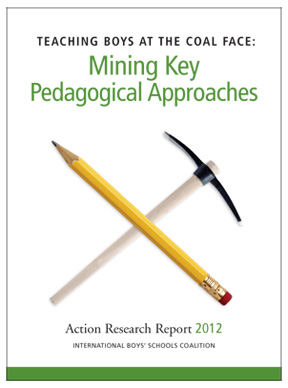 The research undertaken by the 2011–12 IBSC Action Research Team is an extension of previous research undertaken on behalf of the IBSC by Michael Reichert and Richard Hawley. In their report to the IBSC, Teaching Boys: A Global Study of Effective Practices (2009), and subsequent publication, Reaching Boys, Teaching Boys: Strategies that Work – and Why (2010), Reichert and Hawley debunk the myth that boys are resistant to schooling. Their large-scale, worldwide study of boys and their teachers emphatically reveals that boys want to succeed at school, and that a significant part of leading them to such success is the forging of positive student-teacher relationships. To complement their findings, Reichert and Hawley provide teachers with a comprehensive toolkit of strategies that work effectively with boys.

The literature and research are overwhelming in their support of pedagogy that is student-centered and which fosters positive relationships between students and their teachers. Also compelling in the literature is the implication that the attitudes and actions of teachers are amongst the strongest influences on their peers’ decision to change their practice. It follows, therefore, that an initiative such as the 2011–2012 IBSC Action Research Project, where these two notions are combined, has the power to significantly influence learning and teaching in boys’ schools.

It is a selection of these strategies that the 2011–2012 IBSC action researchers investigated, implemented and evaluated within their own classrooms, under the research theme, Teaching Boys at the Coal Face: Mining Key Pedagogical Approaches.

How will student leadership, in the revision of the awards structure of the Character Education Programme, affect boys’ acceptance of, and engagement in, the programme?

How can adapting our pedagogy to focus on the creative process, engage boys in risk-taking and critical thinking?

What happens when I incorporate role-play and restorative practices conversation to the existing detention process?

From the Inside Out: Using Internalised and Empathetic Characterisations to Aid the Emotional Growth of Boys — Russell Untiedt, St. John's College, South Africa

What effects will strategies focused on internalised characterisation and empathy building have on boys’ emotional development?

If You Build It, Will They Come? Flipping the Classroom — John Thornburg, St. John's Northwestern Miliary Academy, United States

How does an online learning component affect the learning relationship a boy has with his teacher?

What effect will game-based learning have on boys’ engagement and performance?

What effect will implementing a daily mindfulness programme have on the growth of boys’ emotional intelligence?

Could integrating reflective practice into coursework help boys appreciate learning from each other, as well as helping to understand themselves as learners?